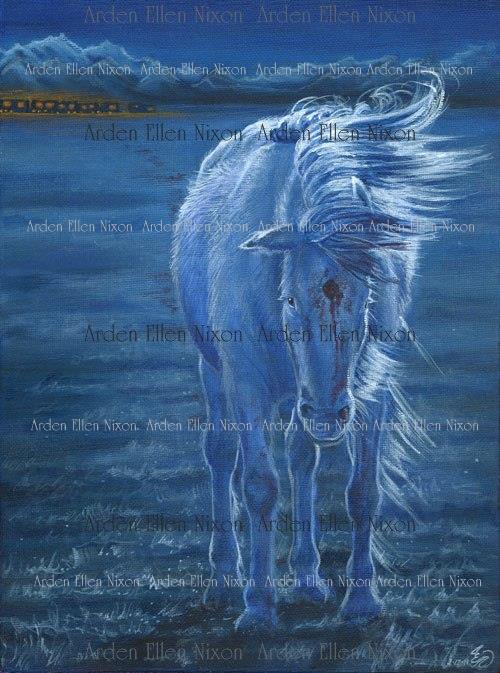 A few years ago, I gave the book The Unicorn by Nancy Hathaway to a friend for her birthday, knowing she would enjoy the beautiful artwork. Having borrowed the book for research purposes--I had a painting of "The Lion and the Unicorn" in mind--I finally read the collected legends and folklore therein, something I hadn't had a chance to do before (a habit of mine--I like to make certain of my gifts!). A few tales had beautiful endings befitting the ethereal creature they described, but most related ill-meetings with man. A particular legend has stuck with me for weeks, even haunting a few dreams, and it is summarized as follows:

A once prosperous Russian village found itself beset with trouble after trouble, until its fields were reduced to dust, and its wells had become foul and diseased. Gradually all of the inhabitants became ill, until only the women had just strength enough to fetch more filthy water for their families. Talking amongst themselves at the well, they hit upon the idea of finding a unicorn, whose horn was said to heal and purify. However, unicorns only entrusted themselves to virgins and were known to run pretenders through with their horn--a problem, indeed, for a village full of married women, save one. Katya stepped forward to volunteer for the task, though the others mocked now as they always did. She had children, of uncertain origin--no one knew the father, or if she was even their mother. Even so, her bravery won the rest over, and they agreed that she and she alone would attempt to attract a unicorn.

There was a river nearby where unicorns were rumored to drink. On its banks Katya sat, still and silent, patient as the creature that finally appeared near night fall. They held each other's gaze, Katya and the unicorn; whether she was a virgin or no, their understanding was the same. Lowering its head, the unicorn allowed her to tie a thin length of linen around its neck, by which she led it to and through the village. All the wells were purified by the golden horn, as were all ewers, cups, and other full containers. Even the beds of the sick and dying were passed over, ensuring that they would wake come morning.

While Katya and the unicorn made their rounds, the rest of the adults in the village watched them secretly, marveling at the magical beast, the properties of its horn, its rich coat. Suppose the healing spell left with the beast, or another plague hit them in future times? Not to mention what good they could do with the wealth they could earn at the nearest city market--authentic unicorn parts were hard to come by. Of one mind and one mission, they moved forward just as Katya and the unicorn moved away from the village, their task complete.

Katya's hands had just touched the unicorn, her fingers twisting to untie the linen knot, when the first blow was struck to the beast. Screaming, she found herself pulled away and pushed aside as lassos were thrown and blades weilded. The unicorn's cries rang high and loud, its blood black on the ground, the clothes and hands of the celebrating villagers. Sobbing, Katya ran from her neighbors, to her home, to her three children that were not her own, whom she woke and made pack. She filled as many containers as she could with the blessed water and, still crying, left the village before daybreak.

Katya was little missed--the villagers had their kill to boast of and part out for market. The resulting goods and gold were lavish, so much so that bickering and battles soon broke out over who deserved what, never mind earlier agreements over even spoils. Never mind the prosperity that visited the villagers briefly, for within weeks another, more deadly plague ravaged their lands, their children, their starving, boil-covered bodies. Never mind their suffering, for they never minded their betrayal of the unicorn, who gave them better than they deserved. That, they had now.