"Nikola Tesla"
10 x 20"
Acrylic on Canvas board
For Sale ~ Contact me if interested!
~ Prints (with and without the text) are available here ~

And now for a few real Tesla quotes:

"If Edison had a needle to find in a haystack, he would proceed at once with the diligence of the bee to examine straw after straw until he found the object of his search. ... I was a sorry witness of such doings, knowing that a little theory and calculation would have saved him ninety per cent of his labor."
~ New York Times (19 October 1931)

"Let the future tell the truth and evaluate each one according to his work and accomplishments. The present is theirs; the future, for which I really worked, is mine."
~ Politika (April 1927)

Few are the lives that are as inspiring and dispiriting as that of Nikola Tesla. As a man who lived for learning, he lost much to men like Thomas Edison, who lived for money, never mind at whose expense. The "War of Currents" between Tesla's alternating current (as used by his employer at the time,Westinghouse)and Edison's less efficient direct current saw animals publicly electrocuted by the latter in an effort to smear his competitor, not to mention the $50,000 that Tesla was promised but never paid during his brief employment with Edison years prior, and this after refining many of Edison's inventions at Edison's request. That Edison was capable of great things, himself, makes his underhanded treatment of his fellows and patent stealing (he who files first wins) all the more insulting. That history knows better now doesn't negate the hardships in Tesla's later life, but at least his true legacy has won the future for him, just as he wanted.

As for the handsome loner Tesla, he attributed his striking blue-gray eyes (unusual for his Serbian heritage) to having thought so hard all his life, thus lightening their color through sheer mental exertion. He claimed to never sleep for longer than two hours at a stretch, and short of careful lighting, many photos show substantial dark rings about his deep-set eyes. Upon enlarging several photos to work from, I was surprised to find that his eyes were not only pale, but speckled, and his thoughtful crows' feet were to be found even in images of him as a young (and un-mustached!) man. Tesla was immaculate in his grooming, not for vanity's sake, but as a reflection of his orderly and obsessive nature.

If ever you want a treat, watch the movie "The Prestige," which features David Bowie playing Tesla during his time in Colorado Springs (May 17th, 1899 - January 7th, 1900). Facially, they are remarkably alike, and Bowie's accent is spot-on. 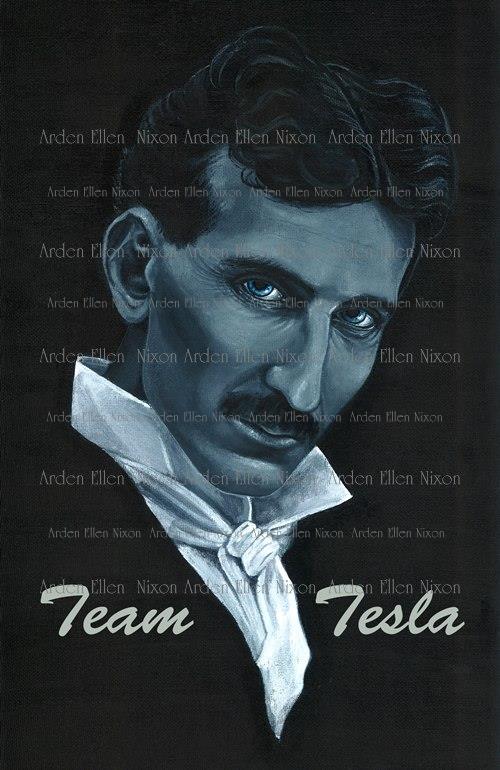