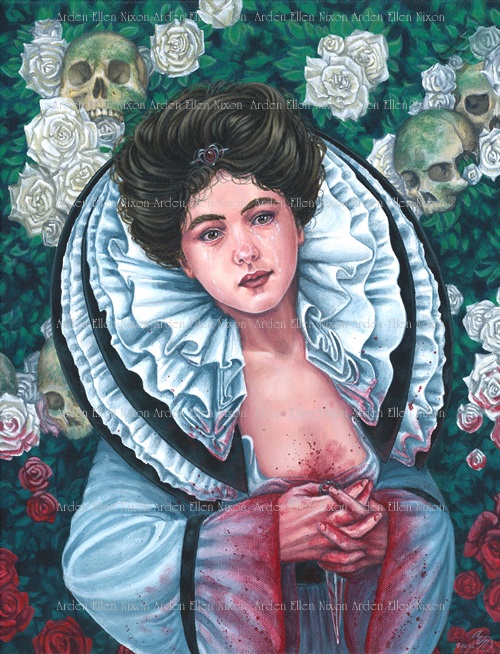 How could she forget.

Having not painted an "Alice" piece for several years, I decided to do a portrait of the Queen of Hearts. What was going to be a relatively silly painting with her playing cards and holding the "Dead Man's Hand"* became something more when I began researching my Victorian model, Evelyn Nesbit. I chose her because I wanted a queen whose soft femininity contrasted with her brutal attitude, but in reading about Nesbit, I found a very real person whose beauty attracted the worst in others. I began to think of the Queen from a different angle, like an Ophelia who, rather than drowning herself, lived on after the madness of heartbreak. This also shaped her costume; what was going to be a more stuffy, Elizabethan outfit became an elegant gown, soft with ruffles and velvet, all white save for black details and blood stains.

* The "Dead Man's Hand" consists of black aces, black eights, and an unknown fifth card. These were the cards allegedly held by Wild Bill Hickok when he was murdered in 1876.