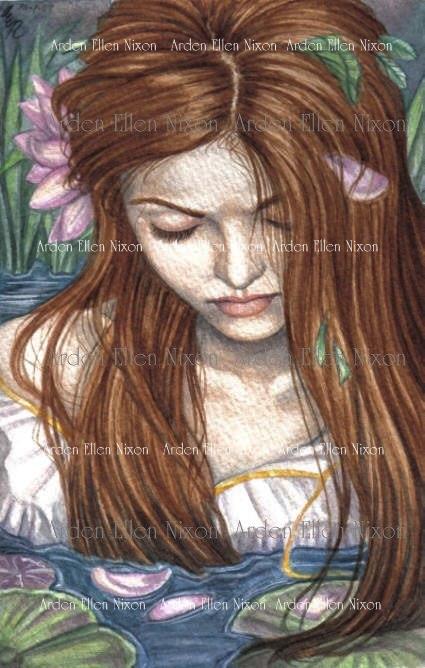 This is not the Ophelia I started out to paint. The original idea involved a larger canvas, acrylic, and the traditional vision of Ophelia floating in the water. However, after I painted in the figure's first flesh tones, I realized I hadn't chosen a large enough canvas, and there was no repeating the loveliness of that face. Said face and canvas will be used in another painting better suited to their size, but damn it all, now I really had to paint Ophelia! Out came the watercolors, an exponentially (and ironically) smaller surface, and a much more intimate portrait than I had first envisioned.

Many are the paintings of Ophelia dead and drifting, or walking dazedly along the river bank. While I sat staring in frustration at the afore-mentioned canvases, it occurred to me that I yet to see an image of Ophelia actually entering the water. In Hamlet, Queen Gertrude describes her death as accidental: She climbed a willow only to have the branch beneath her break, spilling her into the brook beneath. Alexandre Cabanel's painting Ophelia shows this fall, but I could never shake the feeling that Ophelia had wits enough left to know what fate the water held for her. Hers is a terrible portion in the play, and while the branch's breaking was happenstance, her acceptance of it was not. (I confess, part of this viewpoint is owed not just to reading the play, but to Kenneth Branagh's masterful production of Hamlet, which features Kate Winslet as a most excellent and haunting Ophelia).