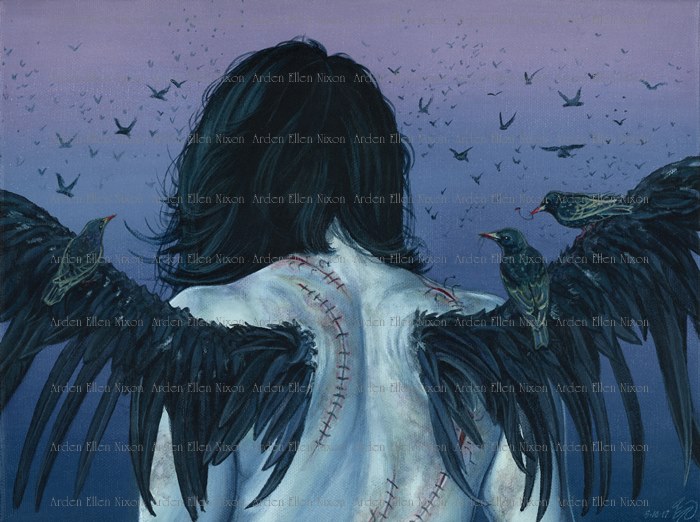 Scarecrow (noun): an object usually suggesting a human figure that is set up to frighten birds away from crops; something frightening but harmless; a skinny or ragged person. Definition courtesy of Webster's online dictionary.

When I painted my first "Make-Shift Angel" back in 2007, I didn't expect it to become a series, but time has proven otherwise. Indeed, they are my favorite paintings of my own and are quite often the most personal.

This is the first time one of my angels has shared space with another creature. I debated the idea for a long while, as over the course of many paintings, Make-Shift Angels have established themselves as solitary. (Another "rule" that came to be is that the angels' faces must never be shown, only hinted at if absolutely necessary.). A friend's off-handed comment about starlings invading her birdfeeder decided the matter, as I found myself researching just why the birds were considered so undesirable--chalk one up for "imported species that seemed like a good idea at the time." As Make-Shift Angels until now have always had lush, beautiful wings (the ninth angel's are still full, if undersized), I thought that Scarecrow should have the opposite. The Galapagos Flightless Cormorant's wings made for a perfect example--striking in their way but useless in the air. Once given her scrappy wings, Scarecrow became whole in her own right and within the rules of the series. She aspires to solitude but lacks the means to escape the invasive starlings; nor will she bat them away even as they bloody their beaks at her expense. Beneath her wounds beats a harmless heart.