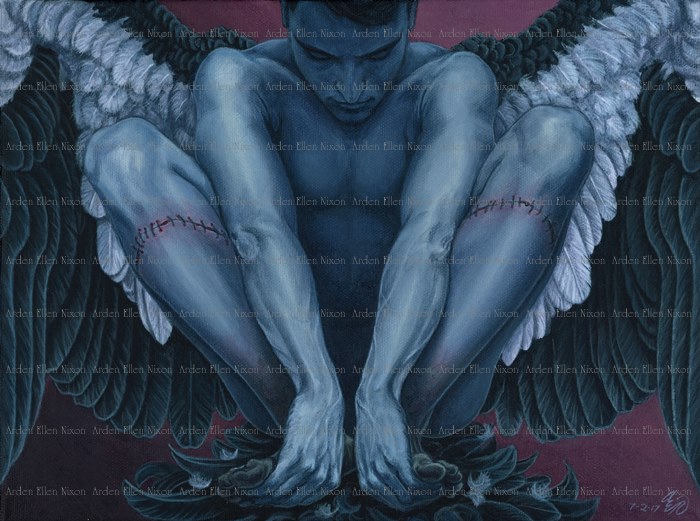 When I painted my first "Make-Shift Angel" back in 2007, I didn't expect it to become a series, but time has proven otherwise. Indeed, they are my favorite paintings of my own and are quite often the most personal. With "Molting," I wanted to create a male counterpart to "Make Do & Mend," mimicking her colors and intimacy. The inspiration was an unusual nude portrait of mountaineer George Mallory, who famously died trying to scale Everest in 1924 and whose remains were found 75 years later. I became fascinated with how Mallory held his feet--the intense play of light and dark, relaxation and tension, the future broken leg that doomed him on the mountain and cemented his "Did he or didn't he?" legacy--and the idea grew from there. Unfortunately, Mallory's hands and feet were precisely where the original photograph was most out of focus! My sincere thanks to B. Samani-Sprunk for recreating the pose for reference's sake. Make-Shift Angels rarely reveal their faces, but his just visible expression of calm acceptance helped clarify both the meaning and title of this piece.